I went to the grocery store yesterday and was so thrilled to see, that they had my favorite soup bones which are turkey necks and turkey backs. I know that not too many people get as excited as I do about eating bones. Alright I have to admit that my mother, 1 sister, 2 Aunts and I do fight over the bones when there is just 1 chicken on the table. We don’t really eat the bones we like to eat around them as they are so delicious and most people who like to eat white meat will probably never get our desire of this delicacy. So here is the recipe: 2-3 turkey backs, 2-3 turkey necks, a gallon of water, 2 parsnips, 4 stems of celery, 4 carrots, fresh or dried parsley, 1 teaspoon of minced ginger, salt and pepper to taste, 1 tablespoon cinnamon, 1 teaspoon paleo seasoning if you can find it ( I use it instead of garlic or onion seasoning which you can use instead of the paleo seasoning) and I added about 2 tablespoons of coconut amino acids. Also, if you have any greens from anything like kale, romaine tops of arugula don’t hesitate to chop them up and throw them in too. Let the soup come to a boil for about 10 minutes and then cook on low for 1-2 hours. You can strain any fat off the next day after refrigerating. You then will have just like I do……yummy…. bones for days.

I dropped over to a friends home yesterday and knew I was only able to stay a few minutes, as I had to go back to work. When my friend opened the door she led me back to where her and her husband were sitting on their patio. I looked at the table and saw 2 different bird books. I asked them what they were doing and they said we saw a new bird in our tree and we are trying to figure out what it is. I loved the fact that they were taking the time to learn what beautiful birds we have here in our backyards in Naples, Florida and it really struck me that this was the epitome of retirement. Imagine taking the time to go get the books out of their library and to actually flip through all the pages until they found said bird. How awesome! It just made me realize that we all have time in our day to enjoy the beauty of our surroundings whether we are retired or not, we need to make an effort to take it upon ourselves to do what makes us happy.

We complain when we can’t get our computers to work, when they are broken or a new update is being installed or for any other reason that totally pisses us off having to do with them. Today was one of those days. How frustrating to think that you have someone working on them for hours at a time while the clock is ticking and you know the hourly rate that you will be charged. So painful!!!

What I want to remember at this moment in time is that I’m using technology to write this blog, when I look at facebook, send a text and so much more. Everyday we enjoy our devices and what they can do and do for us. I guess I’m going to have to try to just suck it up and know that I can not have one with out the other. Hopefully tomorrow will be a better day when we turn on our computers.

Hopefully everyone has a piece of nature just outside their home, like I do as there is nothing like looking outside and seeing the tree’s waving in their gentle way with a touch of breeze, a beautiful bird on a feeder, fountain or tree branch, the flowers in bloom and all of the little animal visits that we get on a daily basis. It is like a mindful meditation when I see such beauty and it relaxes me to my core. I feel that we all need to be apart of our natural surroundings everyday to ground us and to realize that we are all here to cherish and care for our planet in every way that we possibly can.

What a day today was. I can not tell you how many people called me today and told me that either someone in their family died or was in hospice dying. It really puts everything in perspective for me. I know that I have a lot of things on my plate right now and I don’t want to complain about anything as I want to count my blessing and to be grateful for everything I have. Yes, I have my friends, family and my husband to share with and I so appreciate being able to unload on them and for them to do the same with me. That’s the beauty…. we have each other. 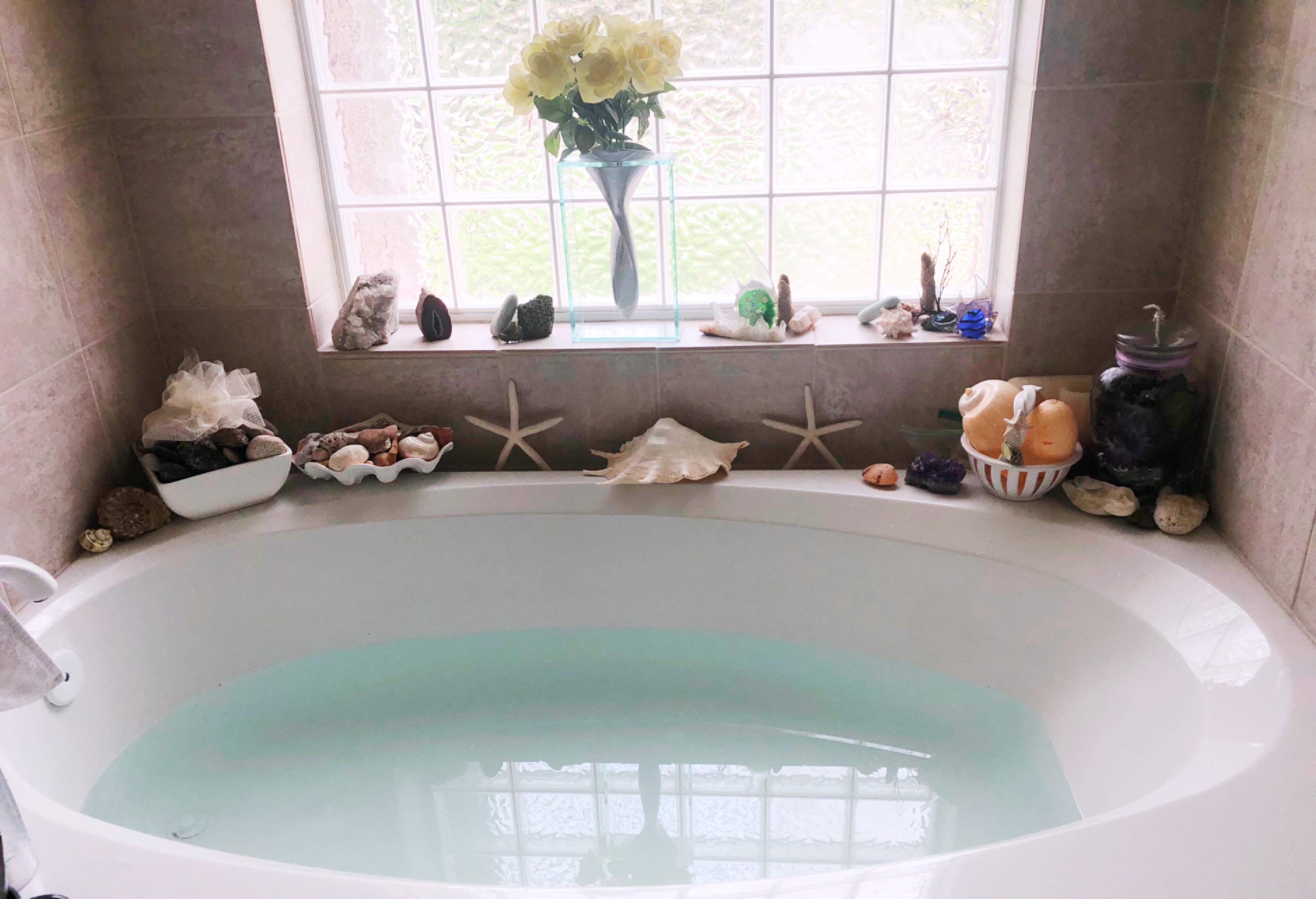 What a special treat to relax in a hot epsom salt bath in the middle of the day and to realize that afterwards that you have time to lay down and read a book that you haven’t had time for and to veg out to yoga meditation music with soft water sounds in the background. My sister is the one that has been encouraging me to take these healthy body retreats. My mind is free of the chaos of the week and I do feel regenerated. Treat yourself!

What a lovely afternoon to celebrate our Granddaughter Sarah’s 4th birthday. Everything was going great until the noise level just got so loud that I literally couldn’t take it anymore and screamed “Quiet Everyone”…. I realized that we had the doors closed and 15 or so people including 6 kids in a very small space with everyone trying to be heard….everyone quieted down after I got a few looks and the party was a huge success. Sarah has so many cousins that just adore her that can’t get enough of her cuteness, Eli her brother was having a great time, the gluten free cake was beautiful and yummy, dinner was delicious and to top it off the Segway lessons & rides were a real hit with my brother, nephew, son and nieces enjoying the ride. I feel so blessed to have an amazing family, the help with everyone pitching in supporting each each other. Maybe next time I’ll just open the door.

One of my favorite things to eat is homemade soup and the funniest things is that I didn’t even know how much I liked soup till I moved into my own apartment when I was going to College. I called my Mom and said oh my gosh what is this stuff they put in a can of soup it’s disgusting?!! From that moment on I realized that I had totally not appreciated my mothers cooking while I was young. It was then that I asked my Mom to give me some of her recipes. Her soup in a bag basically is a freezer zip lock bag she would fill up all week long with any vegetables while she was preparing and chopping for other meals and then at the end of the week she would empty the freezer bag into a large soup pot, a gallon of water, some form of bones like turkey necks or chicken legs and then spices. Talk about yummy!! Mom calls it everything but her Kitchen Sink Soup.

It’s true that I want to be everywhere and to experience everything although over the years I’ve seen myself backing off and saying NO….I know when I’m really feeling my spirit, joy and energy waning is when I need to respect my body and emotional well being. So am I missing out on a lot? I try not to think that I am missing out, and I would have to say that I’m sure there are only so many things that we can do in a day and if I feel like I’m missing someone I make the effort to reach out to them and as to places I put it on my list for the future and make it happen.

I’ve said it hundreds of times just like you have “Things happen for a reason”, well I’m here to say that today was one of those days that I hope to look back on and say things happen or a reason. I feel so blessed with the people in my life and sometimes we just have to let go of our hold on our expectations surrounding what we can not control. Life is about the lessons we learn daily and applying them to every aspect of our lives. 4/4/19